Depending on what media outlet you listen to will influence how you view or understand the growing unrest worldwide. This is simple fact – some media outlets are lying to you without a shred of moral hesitation. It’s not hard to see which ones, if you actually pay attention, but the level of ignorance on this point is astounding to those of us who watch and press for answers without hesitation. 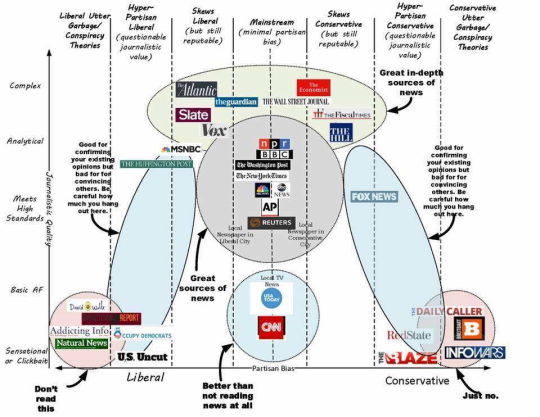 As you can see, your choices for balanced news are pretty limited. Fox news, CNN, USA Today, and Huffington Post are out, along with most “local” television news stations, as are a host of liberal and conservative sites. However, using the central position more toward the top, you can find yourself news that is both balanced and more likely to check sources before they say a word.

So what’s wrong with using a news station that caters to your existing viewpoint? Well, to put it bluntly, they are lying to you for the sole purpose of gaining your advertising dollars. It really isn’t more complicated than that. However, the deeper question should be, why do you need to ONLY hear the news from the slant that agrees with you? Are you that easily led or discouraged that to digest a counter viewpoint is dangerous to that viewpoint? If so, perhaps you need to do some serious soul-searching as to why you are that gullible in the first place, or that happily delusional and clinging to a viewpoint that isn’t either true, balanced, or fact-checked.

Yes, you are part of the problem.

By perpetuating poorly researched news (or outright lies), you spread disinformation and ignorance. Now, if that’s all right with you then we can stop right there. You and I will never get along or agree. However, if you truly do want to understand the truth of it, then you will take a step back and realize you need to re-prioritize your digesting of news sources that are less than reputable.

Early on in my quest for knowledge, I discarded news that seemed biased and/or plain untruthful. I slowly moved toward news sources such as BBC, Wall Street Journal, NPR, New York Times, and The Guardian. I was rather pleased when they came out as trustworthy and have held that position for some time now. While they often have opinions I disagree with, and sometimes their view of the facts challenges my own, I feel overall they certainly come across as less bias and a lot closer to the actual truth of the matter than say Fox News, CNN, or any of the local networks.

Now, what is bias exactly?

Bias is defined as: prejudice in favor of or against one thing, person, or group compared with another, usually in a way considered to be unfair. (google)

I would say that, at this point, I am “bias” against the Tea Party. I find them as a whole to be absolutely disingenuous, thug/bully filled, with little to no regard for the actual truth. That’s my bias, and I struggle with that. I cannot, for the life of me, understand why any thinking person would ally themselves with a bunch of prejudice, hateful people such as snuggle up to that side of things.

It might surprise you (or it may not) to discover that they feel the exact same way about “liberals” (which translates into ANYONE that disagrees with them, regardless to alignment). However, it bears discussion to point out that overwhelmingly, the “facts” they believe with all their heart are -easily- discovered to be falsehoods. Once this is placed in front of me, I cannot accept them or their opinions. In fact, over the last six months, the level of flat out bull-hockey that has passed from their party’s lips has pretty much ruined their credibility for me permanently.

I have no doubt that IS is a terrible group. I also have no doubt that given enough power, the Tea Party would happily be just as bad. Extremists are extremists and if history has taught us anything, if you give an extremist power, they abuse everyone that disagrees with them on any point. It never ends well. For all their rage and rant against “sharia law” (Which they couldn’t identify correctly if you offered them actual cash-on-the-spot) and these “atrocities against women and children,” you would be hard pressed to find a single one that wasn’t 100% for taking away rights from ANYONE that doesn’t agree with them and their warped concept of Christianity and government. They are no different.

So given all this, what do we do? With 1/4 of the country happy about our 45th president, and cheering the changes that strip away our rights, our safety net, our protections, and any concept of free press and free market, how do we get through the day safe and sane?

That’s the harder question, isn’t it?

A long time ago, I was what most would call a moderate conservative. That concept is a misnomer these days, now that the Tea Party has hijacked the Conservative Party. I left the conservatives and went Independent in the 1990s and registered as a Democrat somewhere around 2000. I consider myself a moderate and a progressive, but most would simply call me a liberal. I don’t consider the label a bad thing – but I accept that most people I deal with on a daily basis have no actual idea what a liberal is beyond that they disagree with Fox News.

Today, we are a voting populace divided down the liberal/conservative lines. However, emerging from the black and white mindset are progressives and moderates that align more as an Independent than any one political party. The Tea Party is roughly 40% Democrat and 60% Republican (which boggles, but I digress), and makes up roughly 10% of the voting populace.

For such a small percentage they certainly are LOUD, which gives them a boost in the eyes of the general populace as being stronger in power and voice than they actually are. You combine that with their average age and financial bracket, it places them directly in the most well connected group in the USA. They are more likely to have computers and internet access. They are more likely to take part in online conversations than the average Joe, and they are far more likely to attend local, state, and federal protests, groups, and visibility marches than any other party. This has given the impression they have more power than they do,and has given the general population this idea that they are stronger than they actually are.

Now here’s where things get a bit dicey and may be a bit depressing to hear – so hold on to your hat and I promise I will try to put a more positive spin on things once I get it all out.

Recent polls put 51% of the population of the USA as holding prejudice or anti-black, anti-brown people prejudice.

But that does explain a bit doesn’t it?

Now, given that the ones being asked are likely white, middle income, living in and/or owning their own home/land, and over 50, that number shifts a bit.

The percentage of people around 50 years of age (or older) is somewhere between 25-35% of the population.

Explains our 45th president, doesn’t it? It also explains that gross 51% racist quantity in our country as well. Polling happens to only hit landlines, and only targets home owners. There are roughly 65% of home owners in our populace.

A large bulk of those home owners are over 50. Home ownership is on a decline thanks to the crappy economy and low paying jobs, and it’s not likely to improve unless wages go up (but that’s a whole different rant).

The point of this flash of math is this: If you only ask a certain demographic these questions, you’re going to get skewed results.

So, the long and short of it is, we’re not likely AS prejudice as the numbers would like us to believe BUT it’s safe to say that at least 1/4 to 2/3 of the population struggles with racism and prejudice in their heart.

Why is this important?

Well, first, only 50% of the country actually votes. Our 45th president was elected by less than 1/4 of the country. He didn’t win the popular vote and he only won due to the Electoral College giving more weight to votes in rural areas over votes in the cities. it’s a stupid system and it needs to change, but again, that’s a whole different rant for another day.

Since you are more likely to vote if you own a home, see the above demographics. Again, this explains a lot about how the 45th President got to power.

YOU need to do this. ALL OF YOU.

YOU need to squawk and fuss and make as much noise as possible. Join marches. Join rallies. Join and be heard.

Because we have to shout out a loud, rude, and obnoxious populace of voters known as the Tea Party. WE OUTNUMBER THEM about 10:1 (ten to one), and it’s time we remind the country that they are a minority, not a majority.

WE have to stop them from controlling the voice of the senate and house IN EACH STATE as well as the federal level.

Get involved in your local political groups!

How to Get Involved!

More: How to get involved!

Yep, you heard me right. Get in there with both hands and elbow deep and start working. Nope, it doesn’t matter who you are or what you believe. THE ONLY WAY THIS WORKS IS IF WE GET OUT THERE AND GET INVOLVED!

I’m out there. I’m considering running for office. Let’s get our political process back from the oligarchs and corporations and rich men/women who have no idea what it means to struggle.

I want my country back. Do you? 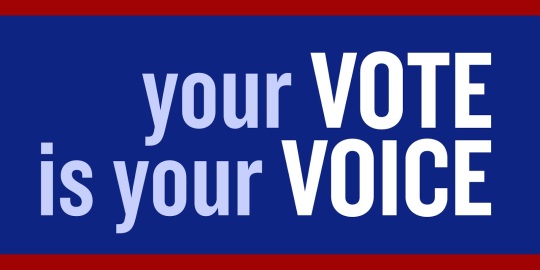 Herbs and Spices Rock My World

coffee and a blank page

a life of serendipity

The World through My Lens

A daily selection of the best content published on WordPress, collected for you by humans who love to read.

Good lives on our one planet